Why Students Should Learn about Different Belief Systems? 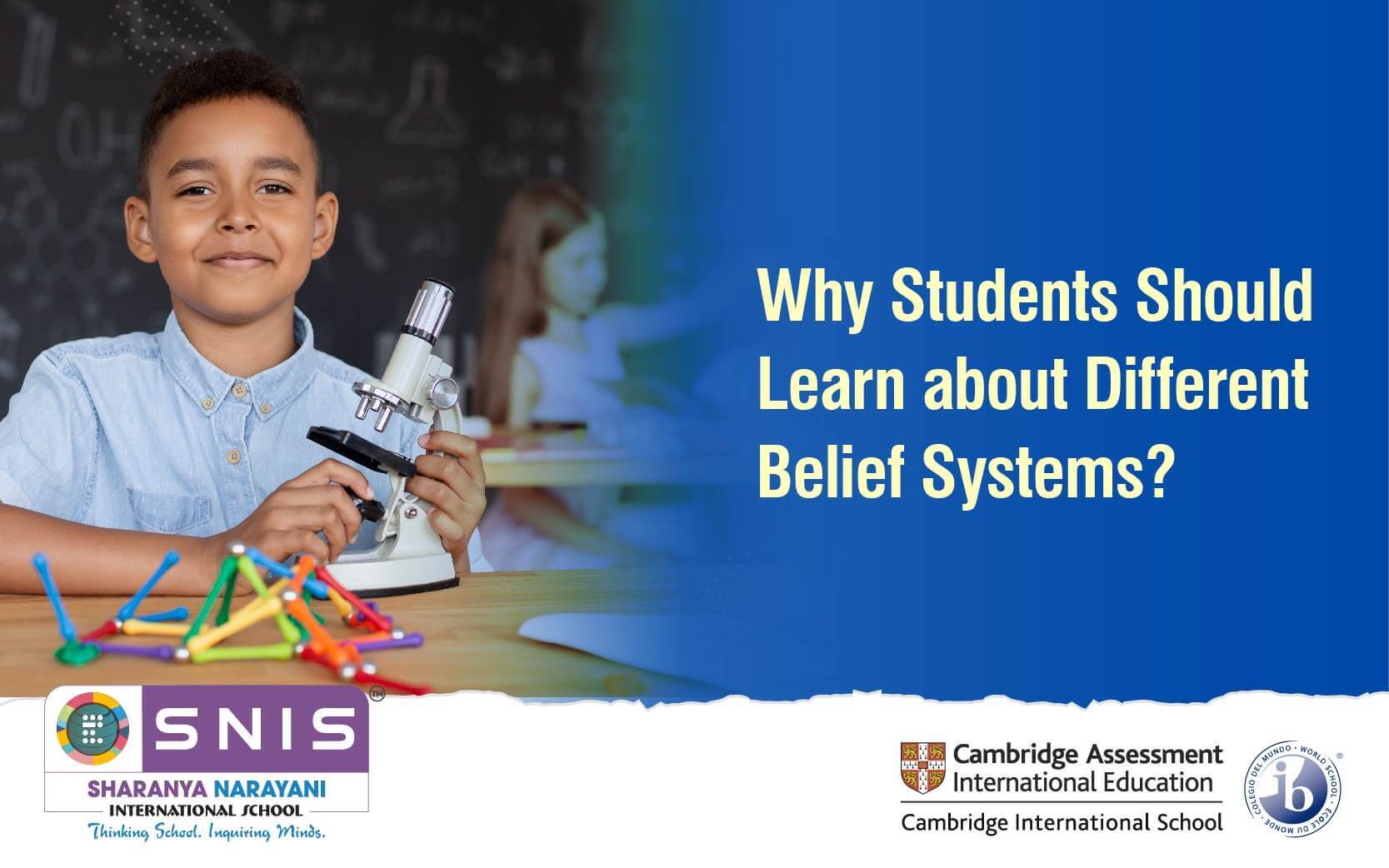 06 Apr Why Students Should Learn about Different Belief Systems?

Posted at 13:14h in Uncategorized by SNIS 0 Comments
1 Like

Back in the days, before the advent of the infinite world of internet and information technology, we were lucky if we ever left the tiny whistle-stop we were born in. It didn’t really matter what was going on in Washington or Budapest when you lived in a small cow town. Ergo, there was no reason for students or anyone for that matter to be globally competent.

What is Global Competence? It is a term that refers to the wisdom, proficiency, and other traits used to observe, analyse, categorize, appreciate, rationalize, and use elements locally, nationally, and internationally to perambulate the world successfully. Global competence is the productive toolkit students need to meet the challenges and opportunities of the world.

Understanding and weighing perspectives—from different people, cultures, and schools of thought—are important global competence skills that all student should develop.

Sharanya Narayani International School, one of the top international schools in Bangalore is an IB World School, which has been successfully offering the IB PYP (Primary Years Program) for 7 years. All students of SNIS are encouraged to be internationally-minded and adhere to the principles of the IB Learner Profile.

In its curriculum, the PYP’s Units of Inquiry (UOI) challenges students to investigate and inquire into the world, consider a diverse perspective, translate abstractions and notions into ideas, and take meaningful poignant action.

SNIS’s globally focused PYP curriculum intrigues students in their own findings and learnings and propels them to strive for knowledge and understanding. And an inquisitive, inspirited student always endeavours to learn beyond the classroom and school walls.

Most units inspire and excites the students and invigorates them to dig deeper and learn more, but some units inspire, changes perspectives, breaks stereotypes and challenges assumptions. Those are the units that make an educator feel a sense of accomplishment, feel that they have made a small difference. Those are the units that remain in the memory, because more than knowledge and skill, these units truly encourage critical thinking, inspires insight into the perspectives of others, improves the ability to appreciate the differences between people, be comfortable among ambiguity and creates a malleable future generation who are at ease with change.

One such memorable unit, under the transdisciplinary theme “Who we are” was discovering the similarities of beliefs, values and belief systems, which would lead to a greater appreciation and understanding of one another.

At SNIS, during grade 4’s Belief Systems Unit, to ensure that students of less familiar cultures and religious traditions feel included and safe in the learning environment, opportunities were provided for all students to share unique aspects of their identities. As the classmates became more educated about each other’s differences, the likelihood of exclusivity diminished. In fact, every unique culture was celebrated and understood from different perspectives. The students also chose an unfamiliar belief system to themselves and inquired about it, finding out amazing facts and discovering new found respect and appreciation for the earlier dismissed custom or tradition. Some profound reflections and introspections led the students to conclude that traditions and culture may differ, but the moral value and underpinnings of all belief systems are almost identical.

The students also had healthy debates about positive and negative impacts of belief systems, their contributions to society through real life case studies, newspaper cutting, video clippings and guest lectures and sharing of experiences.

For multiple reasons, many educators are understandably hesitant to raise the topic of belief system or religion in the classroom. Most educators worry about offending some sentiment, misrepresenting a custom or tradition, or even sub consciously favouring one belief system over another. Contending with and prevailing over this reluctance is critical towards creating a respectful learning environment that decorously prepares students for an increasingly distinguishable yet more than ever connected world. Learning about different belief systems and religions in an unbiased and academically sound way, not only is an educator’s responsibility but also the need of the hour.

Religiously motivated crimes of hate are rising every day. In a survey conducted by the University of Cambridge, the percentage of crimes that were inspired by religious bias are rising three times higher every year. Two out of five such violent hate crime perpetrators are school-age children. By stirring students to understand and appreciate people of different religious belief systems, educators can combat such disturbing statistics and contribute to a more peaceful future.

The new generation of students require different skills from the generations that came before. Globally we are evolving faster than ever. Boundaries are shifting and disappearing altogether. The culture that once existed halfway around the globe now lives just down the road. The ability to thrive in this new and rapidly changing environment is grounded in a globally focused mind-set that enjoys cultural differences, navigates changing realities and accepts and appreciates every small and unique nuances.

Today, governments, businesses, and cultural institutions are called to solve the world’s problems symbiotically. These conundrums require higher-order knowledge and thinking skills, as well as synergistic language and cultural understanding. In a globally focused curriculum like the IB PYP, students prepare to approach problems from multiple perspectives that can solve future global problems. If students are to function as globally competent citizens, they need to understand world religion’ inestimable profound impact on history, society, politics, and culture.

“There is all the difference in the world between teaching children about religion and handing them over to be taught by the religious.” – Polly Toynbee