The importance of inquiry based education 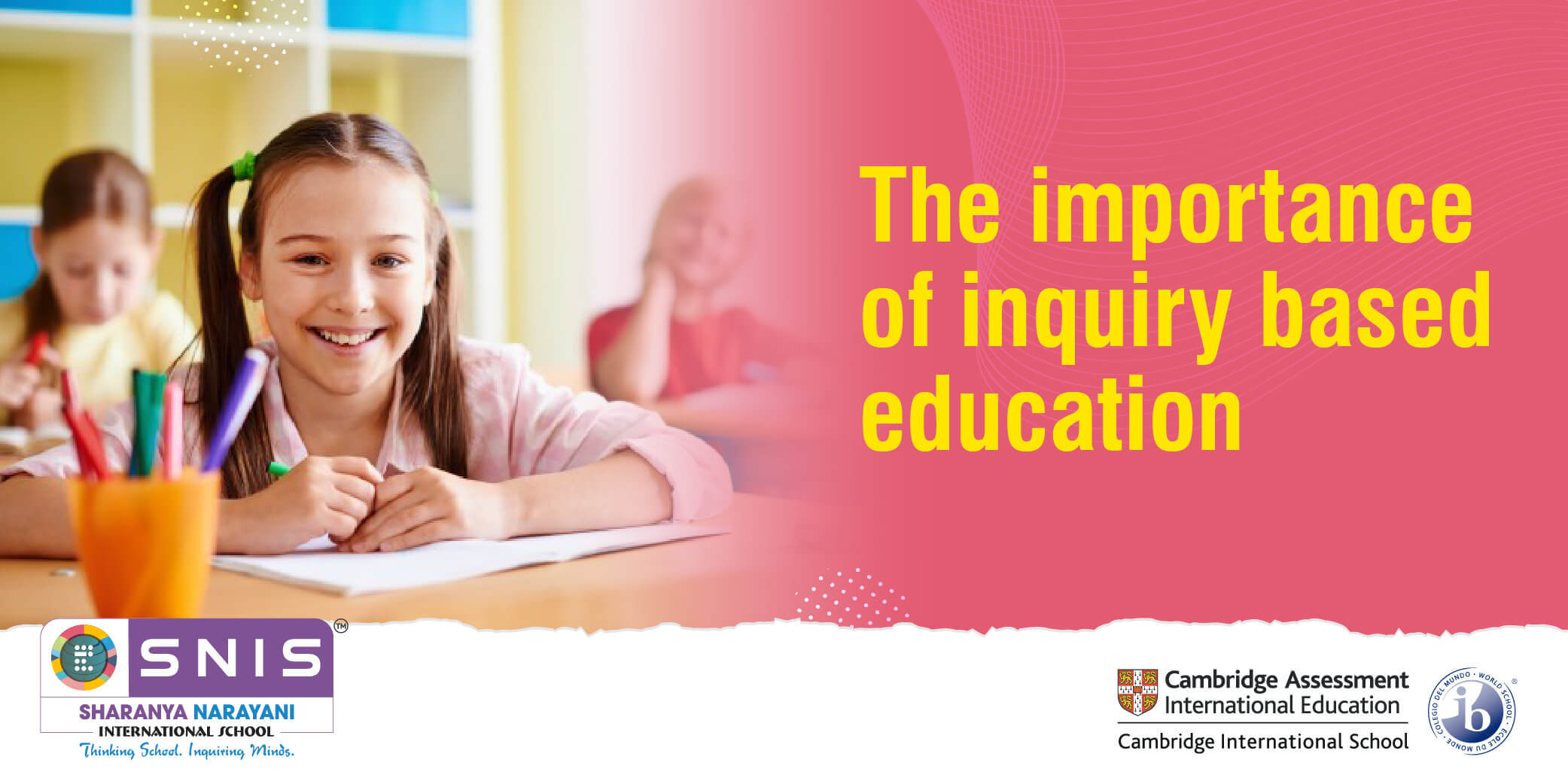 24 Jun The importance of inquiry based education

Posted at 13:22h in Uncategorized by SNIS 0 Comments
0 Likes

‘The best teachers are those who show you where to look but don’t tell you what to see.’ –Alexandra K. Trenfor

Inquiry-based learning is a process where students are involved in their learning, create essential questions, investigate widely, and then build new understandings, meanings and knowledge. That knowledge is new to the students and may be used to answer their essential questions, to develop a solution, or to support a position or point of view. The knowledge is usually presented to others and may result in some sort of action’ (Alberta Learning, 2004)

Putting children in boxes with a teacher is a relatively new idea. There was an era when schools as we know it, did not exist. Every country and culture had its own system of educating their next generation. Right from Australia, where the aboriginals, for the last 60,000 years or so had an initiation for their children.  Through which, they learned the secrets of their people, making boomerangs, tracking animals, when to sow, when to harvest. Water dowsing, which herbs and berries can be used for medicine and various illnesses.

In Fiji, nephews would be apprenticed to their uncles to learn how to make canoes, or how to build bures. How to catch fish, which fish are edible and which are poisonous.

In some parts of Africa, schools referred to as “bush” schools, or apprenticeships. Bush schools were similar to training camps that pass down cultural skills, traditions, and knowledge to their students. These schools were located in forests outside of the towns and villages. Children received training in cultural crafts, fighting, hunting, and community laws among other subjects

Ancient India followed the Gurukul system of schooling. Gurukuls were traditional residential schools. Schools were learning centres in the teacher’s house or a monastery. Students lived there and learnt all life skills. In every community, knowledge was handed down to the next generation.

Indigenous learning systems were universal and extensive in the 18th century. And ironically the 18th century also marked the beginning of the first Industrial Revolution. Animal labour and manual labour was replaced by new inventions and machinery and with the advent of steam engines, modern manufacturing began. The 18th century was also known as “The Age of Enlightenment,” a period characterizing a paradigm shift in thinking and philosophy, it was a shift away from traditional religious authority and embrace science, art and rational thought. This triggered the various revolutions like the American Revolution, the French Revolution, spread of capitalism and therefore the increased availability of printed materials.

Exploration and experience were true teachers, rather than textbooks and classroom lectures. True learning comes from doing for yourself, constructively analysing and then applying what you’ve learnt. The melding of experiential learning, intellectual connection, emotional engagement and physical application; True Learning occurs in an environment wherein motivation is mainly intrinsic, and learning becomes its own reward and discovery is a natural side-effect of application of what is learned. This in a nutshell is inquiry-based learning.

For many students in today’s schools, the standard classroom approach leaves them bored and unengaged. As a result, they aren’t effectively learning.

That’s where we can see the importance and the effectiveness of inquiry-based learning. Which is in essence a modern, revised and enhances form of the 18th century experiential and exploratory learning.

It is a learning and pedagogic intent that prioritizes student questions, ideas and analyses. To completely understand this pedagogy’s nuances, it’s important to define inquiry-based learning from both a learner and teacher perspective. From a student perspective, an inquiry-based learning’s focal- point is exploring an open query or issue. Which needs substantiation and corroborative reasoning and indigenous problem-solving to be successful in a deduction, which they need to uphold or interpret.

From an educator perspective, inquiry-based teaching’s focal- point is moving students beyond generic mild curiosity into a different dimension of higher cognitive reasoning and divergent thinking and understanding. A teacher’s aim is to inspire students to ask questions and support them through the inquiry process, understanding when to start and the way to structure an inquiry activity. Using methods like guided research, document analysis and question-and-answer sessions. No matter what type of inquiry a student adapts, all inquiry-based learning focuses on developing the learner’s ability to analyse, harmonize and assess knowledge and information — indications of high-order thinking conforming to Bloom’s Taxonomy.

Just like experiential learning of the 18th century, inquiry-based learning actively engages students in the learning process. Students aren’t just going through a routine of hearing or writing what they are learning. Instead, students get the chance to explore a topic more thoroughly and learn from their own experiences.

Sharanya Narayani International School (SNIS), a premier international school in Bangalore, ranked among the top 10 International Day and Boarding Schools in India envisions students as thinkers, inquirers, and as learners who act and reflect. The importance of inquiry based learning here stimulates analytical, logical, critical, creative, and reflective skills to help students become lifelong learners and responsible global citizens in an ever changing world.

Inquiry based learning and education institutes adopting this pedagogic philosophy are slowly increasing. People are able to understand that all rounded, experiential, self-directed inquiry based learning style is the one that lasts and has the potential to trigger a real change. The great question of whether this can inspire a slowed down era, where innovations have been mostly improvements of earlier inventions towards a new dawn of innovation and inventions is yet to be seen.