Teaching values through festivals of India 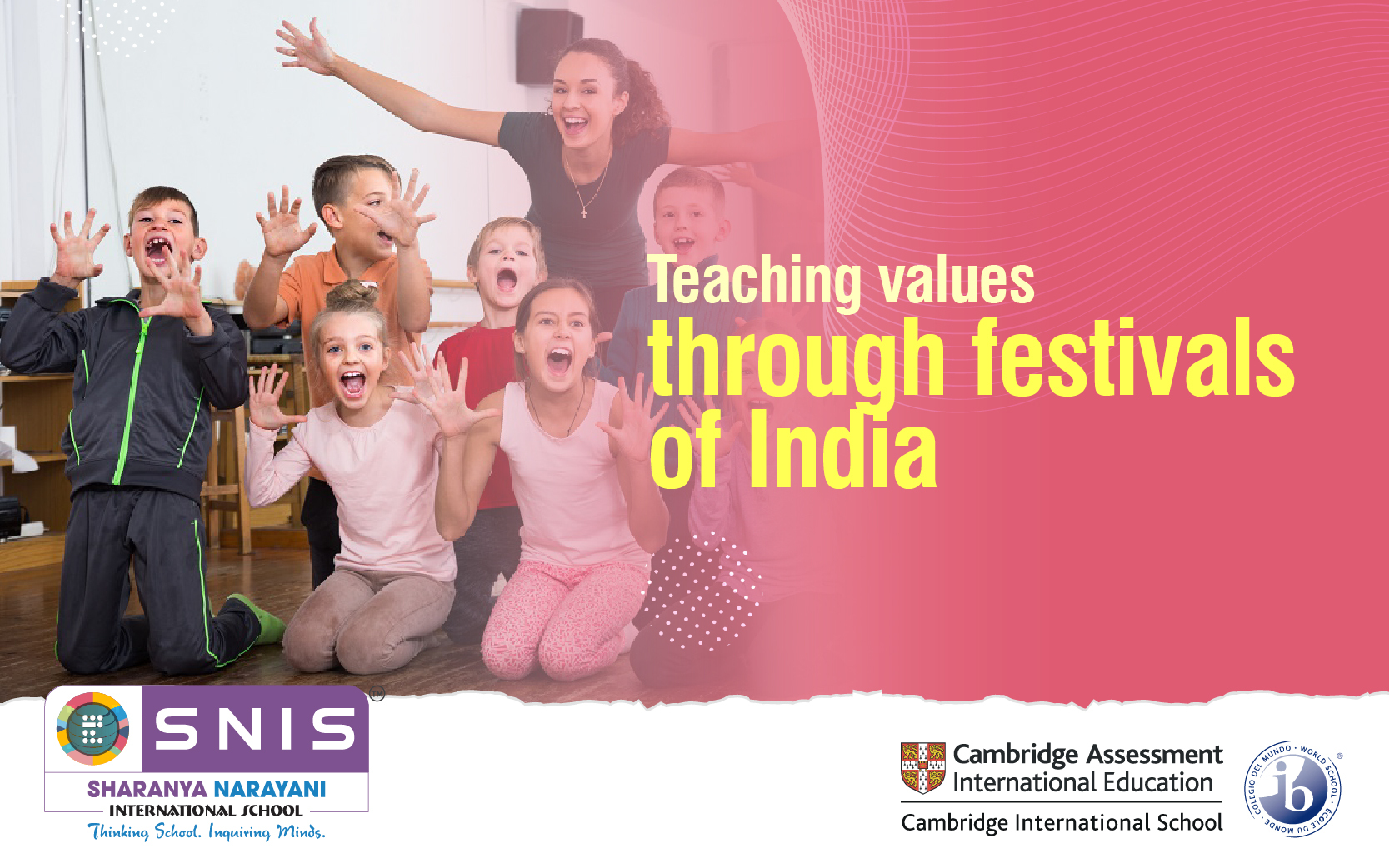 Posted at 05:29h in Uncategorized by SNISAdmin 0 Comments
0 Likes

Festivals are celebrations which highlight our rich and diverse culture irrespective of religion in India. The purpose of celebrating them may be different, but it surely has bound people by strengthening their relationships with their family, friends and the community we live in. Let’s look into some of the important festivals, its significance and the values it teaches us.

Diwali is the major festival of the diverse India. Even though the purpose of celebration differs from North to South, the underlying message of good over evil remains the same. The return of Rama and Sita to Ayodhya after defeating Ravana called for celebration. People of Ayodhya in north of India, welcomed them with lights and hence Diwali is called festival of lights, whereas in south, people celebrated the slaughter of the demon king, Narakasura by Lord Krishna. So what values does this festival teach us? During this festival, families come together which develops the value of bonding and togetherness. The value of discipline is taught by waking up early in the morning and preparing for the festival. The value of sharing is taught by people exchanging sweets with family members and neighbours in the community.

The significance of good over evil does not limit to the festival of lights alone. Dussehra is one of the prominent festivals of India which is observed on the tenth day which marks victory of Rama over the demon Ravana. Lord Rama worshipped Goddess Durga for nine days before slaying Ravana. This festival inspires us to follow the values of dharma (righteousness) and truth. Whereas in south, Navarathri is otherwise called golu, which is arrangement of dolls in steps thematically. In olden days, women wouldn’t step out much. This festival offered them an opportunity to socialize by visiting each other’s house which taught them the values of love and caring for the fellow members in and around their community. This has been carried over generations and still women in the south follow this festival not only to teach values to their children but also to nurture their family traditions through lineage.

Did you know that festivals of India do not only revolve around the mythological stories and religions? We also celebrate festivals for seasonal change, thanking the nature for its important part in the survival of humankind. One such festival is the harvest festival. It is called Lohri in Punjab in North India, celebrated during mid-January. It is celebrated to mark the end of winter and welcoming the summer with people dancing around the bonfire which indirectly depicts the Sun God. During the same period, the harvest festival is termed as Makar Sankranti or Pongal in South India. During Pongal, which is a four-day festival in Tamil Nadu, people not only thank the Sun God but also animals and instruments which also form the source of their livelihood. Through this festival, they impart the values of thankfulness and respect to both living and non-living things which is the source of their bread and butter. The rangoli (artwork in front of home made with rice flour) displayed by women folk during this festival feeds the smallest creatures like ants with whom we share our planet. This festival also fosters bonds within families and teaches the value of caring, love and togetherness to children.

Let’s not forget that India is a diverse country which nurtures other religions like Islam and Christianity. Ramzan is a festival followed by the followers of Islam religion, which requires a month long fast. So what are the values get imparted during this festival? Fasting requires perseverance and tolerance. Through fasting, we learn to empathize with poor people and understand their pains of hunger and thirst. It also teaches us the value of being grateful for what we have. Christianity is celebrated by Christians around the world which marks the birth of Jesus Christ, who is proclaimed as the Son of God. During this festive time, families come together teaching the value of togetherness. They exchange gifts to show care for their fellow members and think about the Almighty expressing gratitude for their livelihood and survival.

Apart from these major festivals, there are other festivals like Holi, Janmashtami, Ganesh Chathurthi, Onam, Guru Purnima, Navroz and many more, celebrated under different names around Indian states. All the festivals are celebrated for a reason. It has its unique nature of celebration but most of all it imparts a lot of learning for young children in the form of values which shapes their identity to be better citizens of the future. Thus celebration calls for joyous moments together with learning values which makes us good Samaritans thus making the world a better place to live for us and other living things, with whom we share our planet.