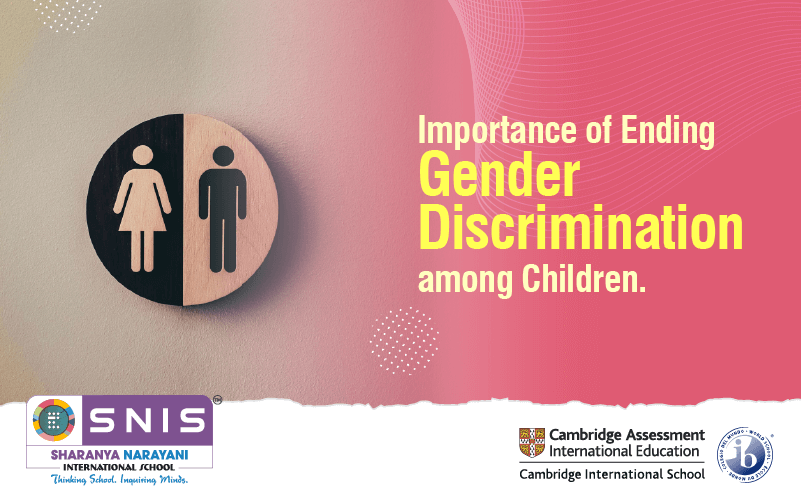 Posted at 10:11h in Uncategorized by SNIS 0 Comments
0 Likes

I am Sriya  K.S from grade 4, studying in Sharanya Narayani International School near Bangalore. It is a leading Boarding IB school. In Grade 4 we are inquiring about Media and it’s influences in our Unit of Inquiry.

I want to talk about gender inequality among children and some of the social injustices that take place in our society. International Social Justice Day is celebrated on 20th February every year. Using the written media, I want to throw light to this social injustice.

One of the devastating problems existing in our society is gender discrimination. I am not saying it is happening everywhere, but it happens in some rural areas.

What is gender discrimination in children? Girls are not getting enough importance. Society is giving priority to boys.

I believe strongly that we have to consider both girls and boys equally.

Each child coming to this world has the right to live peacefully. The regretful fact is that, this discrimination is starting before the child is born. Because, many couples wish for sons rather than daughters, they terminate the baby if the baby would be a girl. That is why the government has new laws in place to make sure people cannot find out the gender before birth. But my concern here is not the law but the attitude of our society. If it is not possible for some to determine the gender before birth, after delivery they will abandon their child or some merciless parents will leave the child in some orphanages or will sell them to somebody. Do we know are the consequences of such heart-breaking practices? 2007 UN report says that, the number of girls have reduced approximately by 100 million, it has been calculated that between 2015 and 2030, 25 million men will not be able to find a wife.

Secondly, I want to argue strongly for the right to education for girls. In some countries girls are not allowed to go to school. So, 96 million girls are currently illiterate compared to 57 million boys. In such places, girls are expected to spend their time on household tasks or for taking care of their younger siblings. This horrible situation should end, and each child has to be educated for the prosperity of the nation. Because today’s children are tomorrow’s citizens.

Nowadays we are hearing so many news related to violence against girls. Some among them are domestic violence, early and forced marriage, sexual harassment, etc. Sexual violence is the main threat faced by girls. This soul-crushing act will destroy lives and damage children forever.

There are many reasons for all these violence and discriminations? According to me, poverty plays an important role. Along with that, lack of education among parents also leads to many problems. We need to end violence against girls and women, as they are the pillars of the family and society.

Now it is, time to stop such discriminations. Girls should be educated with boys. We have so many examples of women personalities who reached heights like Indira Gandhi, Prathiba Patil, Kalpana Chawla, Sania Mirza, Mother Teresa etc. As Malala Yousafzai said “If a man can destroy everything, why can’t a girl change it?”