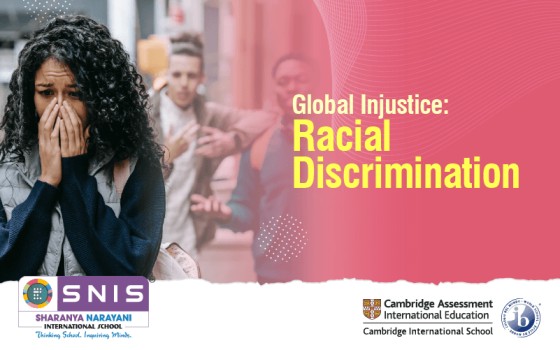 Posted at 10:15h in Uncategorized by SNIS 0 Comments
7 Likes

“I look to a day when people will not be judged by the colour of their skin, but by the content of their character” once said Martin Luther King Jr.

Only that “DAY” seems to be seven eternities away……….

I am Sudiksha from grade 4, studying in Sharanya Narayani International School near Bangalore. It is a leading Boarding IB school. In Grade 4 we are inquiring about Media and it’s influences in our Unit of Inquiry.

International Social Justice Day is celebrated on 20th February every year. Using the written media, I want to write about Racial Discrimination.

Firstly, even though LOGIC is said to be half of the human’s brain, that very same logic seems to make humans inhumane. It makes us racially discriminate our fellow human beings. Our logic is in fact blinded by irrational belief system.

Not only is being light-skinned considered beauty, but melanin-rich people, that is dark-skinned people get higher, more intense punishments for the same crimes as compared to d light skinned people even today!

This is not something that started now, it dates go back to old Colonial history (1700’s) and lives and effects lives even TODAY. Majority of the slaves in the World History were apparently dark skinned people.

The Atlantic slave trade had, more than 470,000 slaves having been forcibly transported from Africa between 1626 and 1860 to present day United States.

Coming to the present, In New York City, 88% of Police Stops led to dark people and 10% to light skinned people, out of which 70% of the cases that involved black people were actually proven to be INNOCENT, this is a recent 2018 data.

It is sad to know that studies say since 2013 till 2017, fair-skinned patients received better and quality health care than 40% of much deserving dark-skinned people.

But do not think it is just a thing of the PAST, because personally, whenever I get verbally bullied, it keeps haunting me and it seems to slam me harder than a base-ball bat, and I am sure same are the feelings of the dark skinned people, whenever they get affected by racism.

The seeds of racism are so well rooted in the society that even children undergo tremendous amounts of bullying, directed at dark-skinned kids and teens, for no other specific reason at all, with about 15.8% of the children being reported racially being bullied as per surveys in the US.

In conclusion, you know the famous rhetorical question “Well how would you feel” and that is something that many racially discriminated people have to ask the world.

Hope the “DAY” Martin Luther King Jr was talking about be Tomorrow!