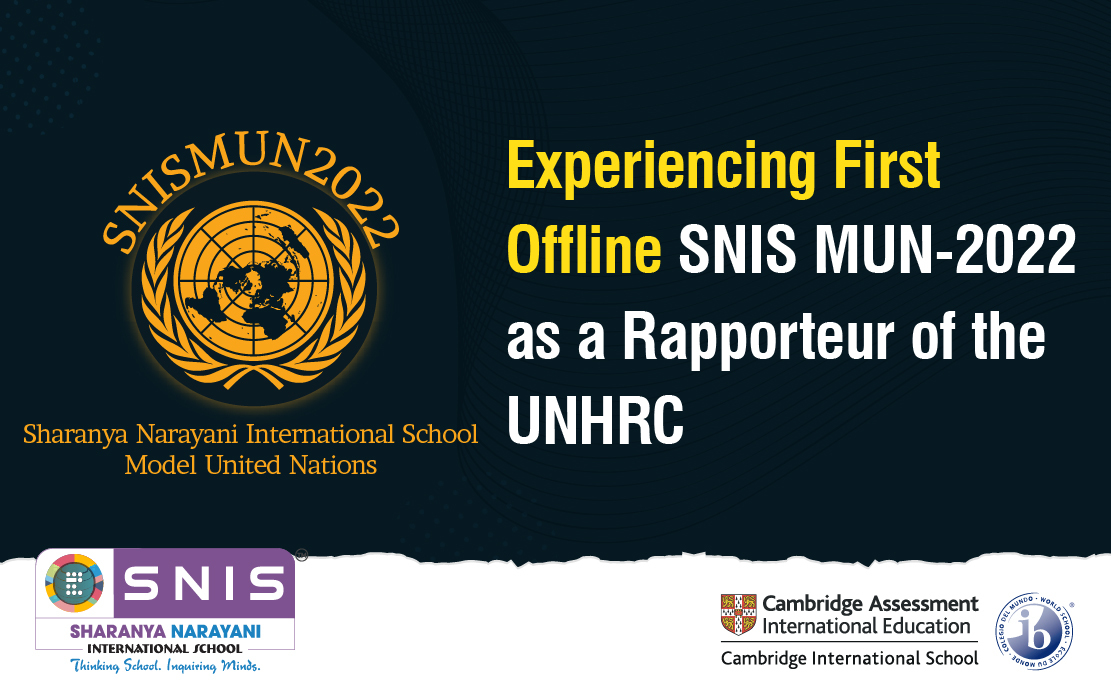 Posted at 12:55h in Uncategorized by SNIS 0 Comments
0 Likes

Sharanya Narayani International School, one of the best international schools in Bangalore, had to host its first offline MUN this academic year, which the SNISMUNOC (SNIS Model United Nations Organizing Committee) fulfilled efficiently, at the same time, gracefully.

As one of the top international schools in India, SNIS had previously conducted MUN online editions in 2020 and 2021 during the Covid pandemic. Our conferences have always been a massive success in the circuit. However, this time, the Organizing Committee of SNIS, invited SNIS students to be the part of the Executive Board (EB). I was one among the most fortunate students to get that significant position. When I got the invite from the OC, I was extremely enthusiastic, and pumped as I would be chairing in one of the most prestigious conferences in the circuit. Being not only a top IB School but also an IGCSE school in Bangalore, SNIS gave us incredible MUN Faculty Advisors, who guided us towards our entire journey into MUNs. With this support, I have participated, completed 11 MUNs as a delegate, for which, I am extremely grateful, and elated. Due to all those factors, the very hard working and busy OC thought I was competent enough to take up this job. This was a very significant opportunity for me; as I genuinely believe in the concept of the Model United Nations.

I was assigned to be the Rapporteur of the United Nations Human Rights Council (UNHRC), which was a thrilling experience. As one of the best IB schools in Bangalore, SNIS incorporates various co-curricular and extracurricular activities in our day-to-day school life and encourages us to participate in a variety of events due to which we had a ton of beginners participating in this MUN conference, and the UNHRC was a junior committee. Therefore, I wasn’t supposed to be harsh on them with the ROP of UNA, which was quite hard for me. I confiscated most of their phones, which made sure that the Secretary – General would impeach me after the feedback session. They impeached me, which was rather hilarious. It wasn’t only the OC who made sure delegates were entertained, but was also the EB. Every delegate in my committee laughed, and this broke the tense atmosphere in the committee. The OC chose the appropriate EB for the conference, making sure that the delegates have a genuine experience.

Overall, I’m sure that every delegate from my committee had fun, and left with confidence that they are capable of being a worthy representative in the forthcoming MUN sessions. Let me tell you this though, for the first offline conference, the OC and the EB members were more than adequate to make every delegate happy. I also show my complete gratitude to the OC, and the school for giving me such a vital, and fun role for the conference. See you at the 2023 SNISMUN Conference!