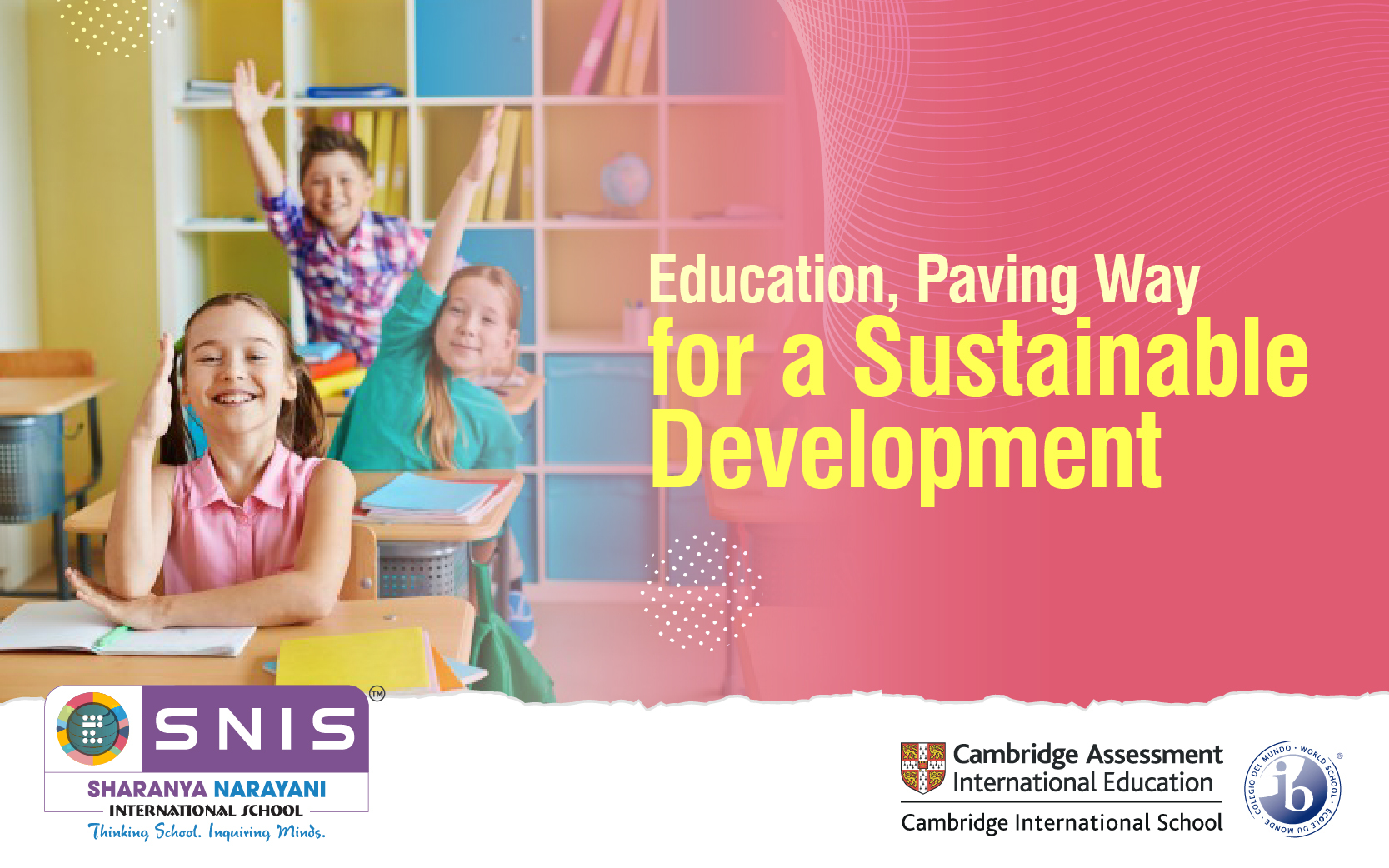 Posted at 08:41h in Uncategorized by SNISAdmin 0 Comments
0 Likes

“We don’t have plan B because there is no planet B!” Ban Ki-moon, the United Nations Secretary General

This is an epoch where change is constant, ingrained and inherent. We experience its manifestations all around us. Though globalization is spurring interactions, international influences, amalgamating cultures, technologies, people, economies and governments, its strong negative reverberations characterized by rapid environmental degeneration, growing unemployment, widening income disparity cannot be ignored.

For long, a growing economy has been indicative of progression. But progress as we know it is becoming more and more skewed.

Though millions live a life of luxury and enjoy un-curtailed financial freedom there are thousands of millions who live a life of abject poverty, living in the shadows of conspicuous opulence. This is a volatile situation; it acts as a catalyst to many of our current social and political imbalances and evils. It is cause for raising antipathy and rebellion and instigates largescale diaspora from rural settings and economically backward regions to cities and economically developed regions. This scenario is lush for organized crime to flourish, which works like an institution, already growing into a massive global enterprise. Information fraud, cybercrimes, arms trafficking among other things are the growing by products of economic progress and development. Terrorism, often sighted as world’s most serious crisis is a consequence and not the root cause. The acute imbalances caused by the social and economic systems and depletion of vital life-sustaining environment leads to pressure, emotional strain generates intolerance and abomination.

New technology and their applications are often hailed as breakthrough and an indicator for economic and scientific progress, however, the results are almost always double edged. For example, nuclear power has the potential for endless commercial energy supply, but the constant fear of nuclear meltdown, accidentally or otherwise constantly shrouds us, in addition to this, decommissioning obsolete reactors and getting rid of nuclear wastes is a cause for major concern.

Information technologies have indeed made the world small, we have diminishing boundaries, we are all global citizens, it empowers communication and exchange of information. But sadly, these social and information technologies are most often owned and run by power hungry political and business groups who strive to serve and focus on each of their interest groups and targets, the over commercialized Internet, social platforms and media, television, and the print media cater to the demands of the rich and the powerful instead of giving voice to all the people.

Therefore, though the world has seen incredible technological advancements and accelerated economic progress over the past century, it has simultaneously experienced the consequences of a kind of development which directly or indirectly threatens the world today with environmental pollution and depletion of natural resource which directly impacts the sustainability of life itself. This is a global issue effecting both developed and developing countries. Human action has mainly effectuated almost all of the environmental problems like climate change, global warming, pollution, airborne toxins, waste management, plastic menace, loss of biodiversity, ozone depletion, resource depletion, acid rain etc.

The etymology of the word “education” originates from a Latin word ēducātiō which broadly means “an upbringing, rearing, a breeding, to lead forth, to raise up”.  Prehistorically education was passing down of required skill and knowledge to the next generation through verbal instructions or examples. Not much has changed in today’s context as well. Education is considered a means to an end, education is considered a tool through which individuals gain the necessary knowledge that enables him/her to find a well remunerated employment on leaving school and therefore be in a position to maintain themselves and their families respectively. In a market-based economy it is assumed that remunerated jobs fulfil a useful function in society, so receiving useful knowledge in the educational system automatically ensures usefulness for the student as well as for his or her society.

Though the above theory is true to a great extent, it does not adequately cover the essence and the meaning of true education.

We are part of a constant transition – the society, technology, culture, the environment – our planet is constantly transitioning into the next phase.  In 1995, Global Scenario Group (GSG), an environmental organization that specialized in scenario analysis and forecasting coined the term “Great Transition”. The theory, simply put, states that our existence has gone through three broad transitions, Stone Age to Early Civilization and then to Modern Era.  The theory states that, history has entered the planetary phase (everything related to our planet and environment), and the ultimate shape of global civilization remains most uncertain. There could be three likely outcomes to this transition: Conventional Worlds, Barbarization, or a “Great Transition”. Conventional Worlds approach would be highly risky as in this approach the current scenario would persist and the world would come up with spontaneous political and economic policies and adaptations to counter any rising challenges, a path that could turn into a social and environmental de evolution (“Barbarization”). Hence, the most advantageous and the best possible course of action would be to work towards a “Great Transition” that subsumes and integrate new conventions that advocates tenable environmental sustainability, social equilibrium , and egalitarianism that focuses on prosperity with an emphasis on qualitative fulfilment, rooted in a set of moral codes and values such as – cohesive camaraderie, ecology, prosperity – that would take preponderance over embezzlement of nature, and commercialism and capitalism.

However, this requires a paradigm shift. The onus lies heavily and squarely on awareness and an education system that develops powerful and ethically rooted global citizens who have a futuristic vision and are able to look above and beyond, critical thinkers, problem solvers who can propel and precipitate a massive change and impede the power of transcontinental consortiums, governments, bureaucrats and conformist ideologies. This, in effect can be called ‘wisdom’, thus education would mean all that the Latin word ‘ēducātiō’ meant “an upbringing, rearing, a breeding, to lead forth, to raise up”.

These exacerbated problems gained the attention of United Nations and International Community so that ways to the solutions of the problems will be designed. United Nations decade of ‘Education for Sustainable Development’ (UNDESD)- 2005-2014 to a large extent accentuated the vital role, education can and must play as a collective responsibility towards sustainable development to save and protect our planet for future generations to exist.

The World Commission on Environment and Development, known as the Brundtland Commission was created in 1983 by the United Nations. This commission defined sustainable development as “Meeting the needs of the present without compromising the ability of future generations to meet their own needs”

By choice or design, India has always been a sustainable society. Due to poverty and poor economic background most Indians, reduce, reuse and recycle. What is heartening though is, of late due to high awareness levels and education, many financially stable Indians are also adapting sustainable consumption.

The Indian government, in its 11th 5-year plan gave significant importance to education and sustainable development. Environment Education (EE) is a compulsory addition to all formal education boards in India. India is the only country in the world to get this implemented through a landmark judgement passed by the supreme court of India.

India has, since 1972, unflaggingly worked on integrating Sustainable development in the curricula.

Other than the numerous ministries involved in sustainable development and education, a large number of government and non-government organizations are diligently working to promote ESD. India is on a positive path, as the youth in India are aware and are making conscious efforts in the right direction. ICT and social media are used as tools to connect with the upwardly mobile urban youth and to reach out to a larger audience.

Big multinational corporations are contributing heavily towards ESD. Their Community Service Initiatives have increased and consequently more and more urban, working professionals are getting involved and workings towards a positive change.

Sustainable development is nonlinear development and calls for innovative insights and ethics. Today’s educational system needs to create programs purposefully oriented to the evolution of timely wisdom in the ranks of the young generation.

Sharanya Narayani International School, a leading boarding/residential IB world school in Bangalore understands the momentous task of contemporary education – that it is the catalyst to inspire transformations and perspicacity. Education, without which individuals will not have the acumen to realise that as a planet we are in the midst of a ticking time bomb and act relentlessly towards transforming the current situation. Since a new civilization cannot be created by directives from a higher authority but must arise from the fertile soil of grass-roots concern and creativity, SNIS realises that education’s task of catalysing timely wisdom in the young generation is crucial. Without it competitiveness in the short term could spell obsolescence in the long term. SNIS instils in its students and by default the parent community the importance of sustainable development. It exemplifies and embodies it in everyday life, on school campus, inside classrooms, from small to big things. The students of SNIS reflect and act as it is the backbone of IB and SNIS’s ideology to always take action, because education without action is no education at all – it is woven into the fabric of SNIS philosophy.  SNIS’s vision and mission is to develop powerful and ethically rooted global citizens who have a futuristic vision and are able to look above and beyond, critical thinkers, problem solvers who can propel and precipitate a massive change and impede the power of transcontinental consortiums, governments, bureaucrats and conformist ideologies. This, in effect can be called ‘wisdom’, “an upbringing, rearing, a breeding, to lead forth, to raise up”.