Caste System In Our Society 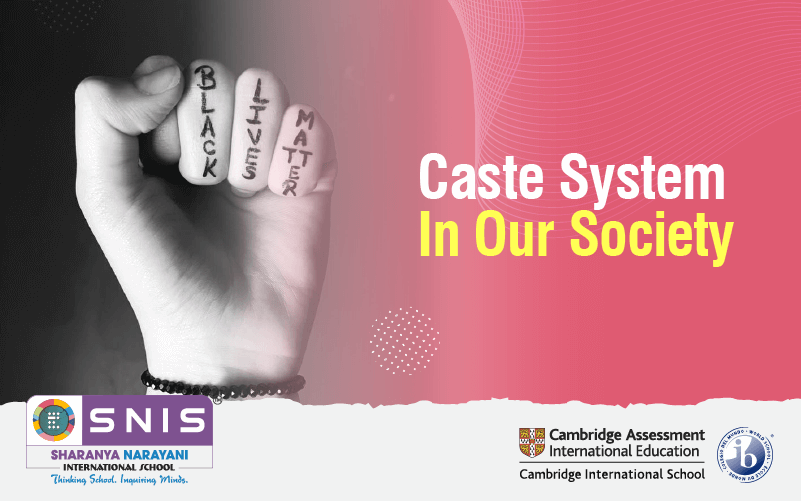 23 Mar Caste System In Our Society

Posted at 10:13h in Uncategorized by SNIS 0 Comments
0 Likes

I am Shreya Ragavendra from grade 4, studying in Sharanya Narayani International School near Bangalore. It is a leading Boarding IB school. In Grade 4 we are inquiring about Media and it’s influences in our Unit of Inquiry.

International Social Justice Day is celebrated on 20th February every year. Using the written media, I want to write about caste system and the shadow it casts on our society even today.

Caste system has been one of the most common and damaging social evils that has been thriving in India for centuries. Centuries ago, communities were grouped or given identities based on the nature of work they were engaged in. As the time progressed this simple idea of grouping people began to associate people with the nature of work they were doing. People engaged in cleaning, farming and other related activities were considered as lower caste, people engaged in learning, managing temples or royal activities were considered as upper caste. Many groups and subgroups emerged, further dividing the people based on their caste.

As caste system thrived, it stigmatised lower caste people and prevented them from access to education, decision making roles in the society, places of worship and good living conditions. Lower caste people were made to live away from villages and towns. They even had to struggle to access drinking water, health care and other basic amenities. This limited access to education and good living conditions resulted in huge disparity of income and wealth.

The deep social division of people caused by caste system was used by many royal families, king and emperors to wield and stay in power for many generations, without having to work on improving social welfare. Even the British managed to use this caste based division of people, and the resulting ignorance among masses, to rule over India for over a century.

The caste based system, by preventing access to education and social welfare, to a section of society, has created social unrest and lack of trust among people.

Even in modern India, with its global identity, the caste based division is almost everywhere, you see caste system is so deep rooted among our people, even with the wide reach of education; people can be polarized based on their caste and community. We get to see this ugly truth, used so effectively, by our political leaders during elections.

As a society, we really cannot experience a holistic development and social welfare, as long as we have caste system that keeps the society divided. Improved access to education among the masses and the rapid urbanization has, to an extent, reduced the influence of caste system in the society. But India being a country who’s more than 70% of the population lives in rural areas has a long way before it can emerge out of the evil effects of the caste system.