Exploring International Mindedness through the theme “Who we are”

05 Jun Exploring International Mindedness through the theme “Who we are”

International mindedness is an important aspect of IB. It means to respect other’s culture, tradition and opinion even if we do not follow the same. An IB programme not only promotes “International Mindedness” to students of other counties studying in schools but creates International Mindedness in the thought process of the students who learn in an IB Programme.To create international mindedness in our young minds, the unit related to the concept on religion seemed to be a seamless fit for our fourth graders. The word religion creates sensitivity amongst people anywhere around the world. To inquire into religion in PYP unit of inquiry for 6 weeks for 9-10 years old, was a formidable thought. We respect the parent community and their beliefs, partners in the education of their child. I know that International mindedness cannot be taught explicitly to the students; it becomes visible through their learning and inquiries.

Most of the students in my class come from families who are open-minded to learning about other religions. Students were given opportunity to choose a religion of their choice to gain an insight and perspective about it. To provoke interest in the unit, I gathered artefacts from 3 major religions and used the visible thinking routine ‘I see-I think-I wonder’ to capture students’ interests. 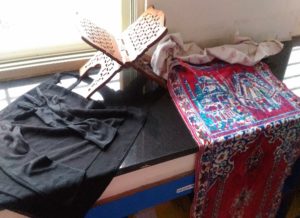 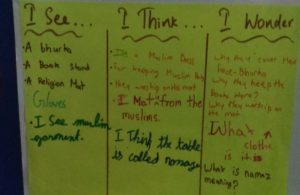 To create a personal connection in the unit of inquiry and arouse the interest students were asked to bring artefacts from their religion and talk about its importance to their peers. This to provide insight into other religions and customs. 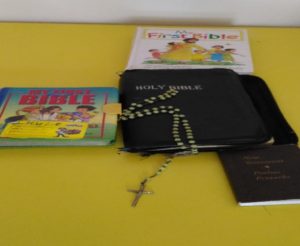 Artefacts for show and tell

As our unit focussed on developing respect and tolerance among students, I planned a field trip to religious temples to help my students to have first-hand information about that religion. Students visited Mahabodhi society- a Buddhist temple in Bangalore where the students learned about the Buddhist ways of praying by bowing 3 times; their festivals; and belief to forego worldly pleasures to become a Buddhist monk.
We also visited Gurudwara – a Sikh temple, where students showed their respect towards Sikhism by washing legs and wearing a scarf before entering the temple. Boys and girls sat separately and bowed before the holy Grant, which is the holy book of Sikhs. Following the traditions at the place of worship, provides an opportunity for students to not only know the customs and rituals of that religion but also to respect them. 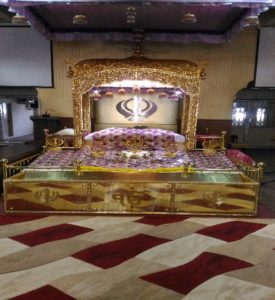 Further into our unit of inquiry, we analysed the beliefs and values of different religions to see how similar and different they are to each other. We made a mind map with ‘religion’ in the centre and different religions beliefs and values sprouting from it. Students made a connection that even though beliefs are different, values like love, empathy, honesty, and respect are similar. Students reflected that all the religions promoted equality.
This lead to another inquiry when one student came up with a question that if Islam promotes equality, then why women are not allowed to enter the mosque? As a follower of different religion, I found this difficult to answer. At the same time, I was overjoyed with the way my students were reflecting and asking questions at the analysing level in the bloom’s taxonomy model. 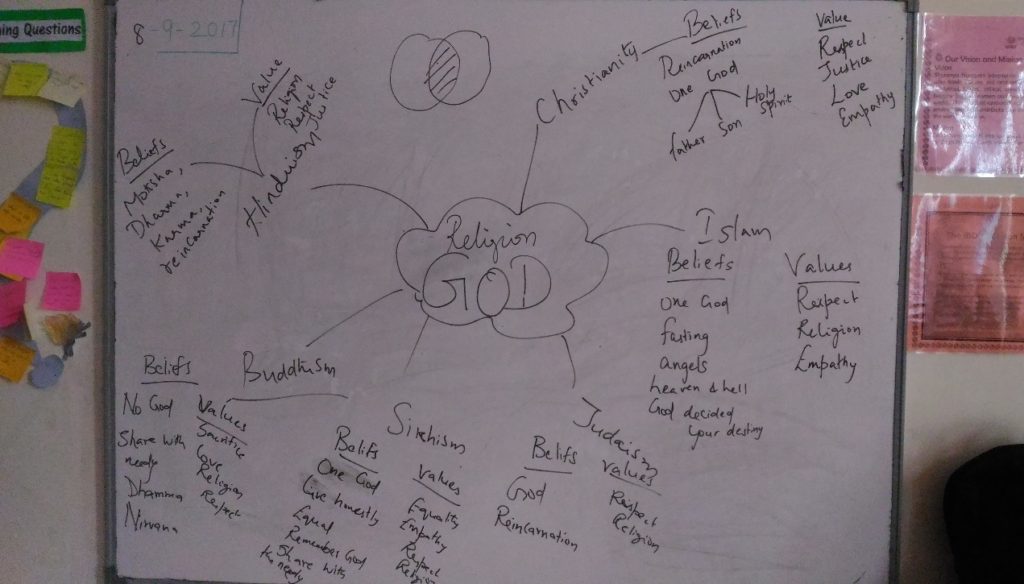 To answer the questions raised by my students, I had organised skype session with a learned friend of mine who follows Islam religion. Students talked about their burning question of inequality in Islam religion. The guest speaker clarified that the holy book Quran never forbid women from entering mosque, but the interpreters of the holy book interpreted the way they wanted women in the society to behave. This gave an assurance to the students that Islam religion is equally rich in its values compared to other religions.
As we were nearing the end of the unit, students summarized their understanding of beliefs and values of different religions by saying that we can follow whichever religion we want to but if we follow the common values like love, respect, empathy and honesty we can live in peace with each other. They presented this idea in the assembly to the whole school on International Peace Day, by dressing in clothing that represents various religions, by reciting the hymns of that religion and beliefs and values of it. Students also made a visual representation of their learning in the form a chart. They showcased the beliefs and values of different religions and in the centre wrote the values on the dove, which symbolises peace.

This unit has brought inquiry and analysis into the different religions of the world and the values they nurture. By facilitating inquiry to enrich their understanding and deepen their conceptual learning I supported global citizens of tomorrow to value and respect other people’s ideas, perspectives, culture, traditions, beliefs and values. I believe, this is what true International Mindedness is.